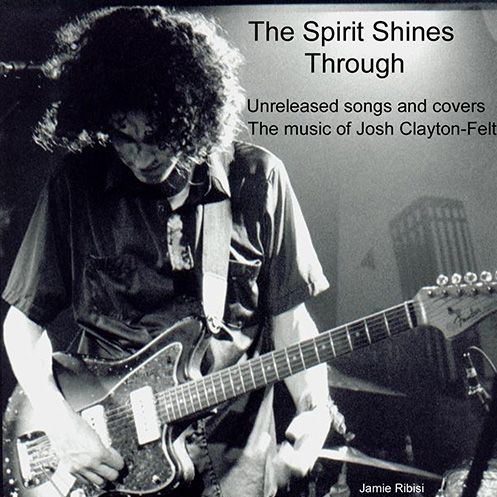 Unreleased Songs and Covers - The Music Of Josh Clayton-Felt

Today, January 19th 2013, is 13 years since Josh's 'spirit touched ground'. To memorialize that occasion and to celebrate Josh's life Connie Naqvi, a wonderful Josh fan, initiated and supervised creation of an album of Josh's music 'The Spirit Shines Through'.

It is available for download through iTunes and CDBaby and soon through many other download providers. All proceeds from sales of this album will go to Descendants of the Earth, the Native American group that was/is Josh's spiritual home.

'The Spirit Shines Through' contains two unreleased songs 'Who Am I Today' and 'Goodbye Green World', (excerpts of which were used in Marilyn's play 'Lightsong') composed and performed by Josh and Michael Ward and four cover songs- 'Backwards World' performed by Holmes, 'Time', another unreleased song that Josh had proposed for 'That Thing You Do', performed by Andras Jones, 'Soon Enough' performed by Renee Faia, and 'Dead American' performed by Ian Baird who also produced and mastered the album.

We hope you'll enjoy the music as you breakfast on banana pancakes.

And please let your friends know about this album.